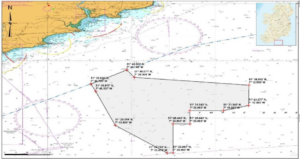 DP Energy Ireland plans to kick off the geophysical surveys on 2 September at the site located off counties Cork and Waterford.

The works will be carried out by ILV Granuaile and are expected to take five days, weather dependent.

The reconnaissance geophysical survey will be undertaken by running widely spaced lines across the array investigation area.

The survey work will be performed using a hull-mounted multibeam echosounder (MBES) and towed seismic system with a maximum towed length of 60 meters.

The Inis Ealga Marine Energy Park is part of a 3 GW pipeline of offshore wind projects that DP Energy and Iberdrola are developing in Ireland after entering into a joint venture in 2021.

The 1 GW floating wind project, currently in its early development stage, is expected to be fully commissioned by 2030.

The developers published a scoping report for the environmental impact assessment report (EIAR) for the project in mid-July. Consultation is open until 21 September.