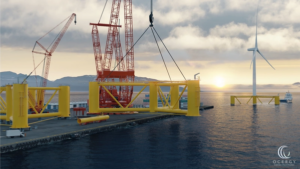 (OE) Ocergy has won a the pre-FEED foundation design contract for its OCG-Wind foundation technology to be deployed at the Salamander floating offshore wind project, run by a joint venture between Simply Blue Group, Ørsted, and Subsea7.

Last year, Salamander signed a memorandum of understanding (MoU) with Ocergy to evaluate its foundation design for the development in northeast Scotland. The UK government has set a target of delivering 5GW of operational floating offshore wind by 2030.

OCG-Wind has been described as a semi-submersible platform designed to utilize the industrial performance of the hull fabrication and assembly through the maximization of the local supply chain. The hull is made of three outside circular columns connected mechanically with trusses to a central column that supports the wind turbine.

A feasibility study considered all aspects of the design, technical performance, fabrication, assembly, operations, and installation of the OCG-Wind for Salamander. It also reviewed the compatibility of the OCG-Wind platform to the site, inclusive of performance, and supply chain and local content management, as well as identified schedule risks and overall project costs. This feasibility study will now progress to pre-FEED phase.

Huw Bell, Salamander Project Director said: “From inception, the foundation manufacturing and assembly was a crucial element for us in delivering higher local content. We’re focusing on the capabilities of the Scottish supply chain, which is helping us in deciding which technologies to advance. Ocergy’s OCG-Wind technology meets our requirements.

“We aim to provide access to double the number of Scottish port facilities over some traditional floating concepts due to lower draft requirements. We also expect a scalable fabrication and assembly process, suitable for commercial scale deployment as well as decreasing fabricated steel mass by around a third, which will reduce the cost of energy whilst also providing potential for local fabrication.”

Dominique Roddier, Ocergy’s CEO said: “The Salamander project is of paramount importance for our consortium and the floating offshore wind industry. This project will demonstrate that the premise of delivering one unit per week, week after week is achievable. This is the last major industry hurdle before the deployment of large, commercial-scale, floating wind projects.”

Salamander is intended to be progressed through the innovation track of Crown Estate Scotland’s Innovation and Targeted Oil and Gas (INTOG) leasing round. The INTOG round will grant seabed leases through an auction process, which will be split into two pots – one for smaller scale innovation projects of less than 100 MW and one for larger projects linked to oil and gas infrastructure.