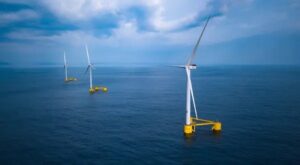 (Reuters) – The Biden administration on Thursday unveiled a plan to accelerate development of next-generation floating offshore wind farms by slashing the cost of the technology by 70% and setting a goal for it to power 5 million U.S. homes by 2035.

The announcement was the latest in the White House’s push to bolster the nation’s fledgling offshore wind industry as part of its climate-change agenda.

Wind turbines that float on the ocean’s surface are an emerging technology necessary for projects off the coasts of California, Oregon and Maine, where the depth of the water precludes the use of standard, fixed equipment.

Floating offshore wind technology is in early stages of development in Europe, where there are a few small projects.

Thursday’s announcement of efforts to support the technology’s advancement will position the United States “to lead the world on floating offshore wind and bring offshore wind jobs to more parts of our country, including the West Coast,” the White House national climate adviser, Gina McCarthy, said on a call with reporters.

By 2035, the United States aims to have 15 gigawatts of floating offshore wind capacity along its coastlines, officials said. The goal is aligned with the administration’s other target for permitting 30 GW of offshore wind by 2030.

As a first step, the Interior Department will hold a lease auction for areas off the coast of California later this year.

In addition, the Department of Energy will commit nearly $50 million to fund research, development and demonstration projects for floating offshore wind. The Energy Department wants to bring the cost down by 70% to $45 per megawatt-hour by 2035.

The effort is included in the department’s “Energy Earthshots” initiatives, which are meant to spur innovation in emerging clean technologies like hydrogen, energy storage and removing carbon dioxide from the atmosphere.