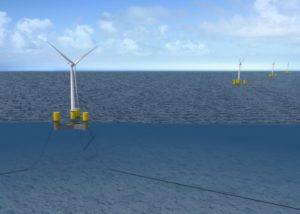 Yesterday it was announced that MHI Vestas 9.5MW turbines will be replacing the GE turbines on the Groix project’s Naval floaters. A bold step by EOLFI and MHI Vestas for good reason: it takes out 1 of the 4 originally planned floaters, a dramatic reduction in costs, one would think.

In an earlier case we saw the 8.4 Kincardine project turbines replaced by 9.5 MHI Vestas, also losing a floater from the planned six units, but the project’s high development costs stood in the way of a sensible analysis of reductions.

Not so with the Groix project and we ran an updated Q Vision model calculation overnight. It would of course be naive to expect that a 25% reduction in floater count would translate 1:1 into the CapEx, as infrastructure costs remain in place, save perhaps the cost of one array cable.

The Q Vision original cost model returned a CapEx of €114 for the 4 unit configuration of the project, the adjusted model returns €99, a solid 13% reduction in CapEx. There is a second positive side to this coin, the increase of capacity from 24MW to 28.5 and further O&M reductions that will both reflect strongly on the life-time economics of the project.

Our subscribers can unlock the new data in the Q Vision CapEx module, including the lower LCoE that puts the project now at the low end of the four French demonstrators’ LCoEs.

* NOTE that Q Vision returns modeled CapEx and LCoE values in case a true CapEx has not been reported. The deviation between model and ‘real’ costs of this project is believed to be in the range of 15-20%.