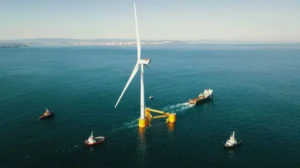 (U) Norwegian energy giant Equinor believes that floating offshore wind can be cost comparable with bottom-fixed wind arrays within around a decade.

“We believe that cost parity with fixed bottom wind can be achieved in the early 2030s, but you really need to go at scale – that’s the way to go with floating wind to achieve cost parity,” Matei Negrescu, vice president of area development North Sea renewables at Equinor, told the Energy Transition Forum by Upstream and sister publication Recharge.

“From Hywind Demo to Hywind Scotland, we reduced costs by around 70%, and then from Hywind Scotland to Hywind Tampen [by] 40% but what we really need to see now is gigawatt-scale type of developments to really reach that cost parity with bottom fixed,” said Negrescu.

“The reason that we think floating wind is so important is that 80% of waters where offshore wind could be developed are at depths that cannot be reached – at least in commercial ways – by bottom-fixed technology,” he said.

“So, it’s going to be a key component of the global energy transition.”

Equinor is already powering 700,000 homes in the UK from its offshore wind farms and when the Dogger Bank offshore wind farm – the largest to date in the world – comes on stream that will increase to 5 million homes.

However, Negrescu says that the company believes no single energy source will be sufficient to solve the energy transition trilemma of supplying power that is reliable, sustainable and affordable.

“We are taking very concrete steps for doing it. We’re looking at integrated offshore wind with energy storage, we have built a pilot battery solution connected to the Hywind Scotland wind farm – it’s called Batwind. And we have also acquired a share in an energy storage platform called Noriker, in the UK, that we’re going to look at how to integrate with our offshore portfolio,” he said.

The Norwegian company is looking at how offshore wind can be integrated with its offshore oil and gas assets to help decarbonise their production operations; and it will soon start operations – now expected in 2023 – at its 95-megawatt Hywind Tampen wind farm offshore Norway that will provide power to the mature producing Gullfaks and Snorre fields.

“Hywind Tampen is the first step [in that integration,” added Negrescu.

Equinor has already started installation work for this project that has 11 turbines, which will be directly connected to the Gullfaks and Snorre fields’ platforms with no connection to shore.

In tandem, Equinor and co-venturers Petoro, TotalEnergies, Shell and ConocoPhillips are undertaking a study for the Trollvind project, an approximate 1 gigawatt floating offshore wind farm in the Troll area around 65 kilometres off the coast of Bergen, Norway.

Equinor in June said Trollvind was scheduled for start-up in 2017 however David Linden, head of energy transition at Westwood Global Energy Group, told the Forum that Trollvind would likely come into operation in “2029 or so”.

Countering that assertion, Equinor spokesperson Magnus Frantzen Eidsvold told Upstream that the project can be realised by building on the good collaboration established between government authorities and the industry.

“We aim to develop the concept for final investment decision during 2023 and start up operations in 2027,” he said.

Negrescu added that the company and others in the industry have started constructing the building blocks for what is dubbed North Sea 3.0 – the phase after oil and gas development, and offshore wind development, when the key challenge will be how to plug together these infrastructures.

“Now what we need to do as an industry, and with our stakeholders, is scale up and accelerate,” he said.

Equinor is also taking steps in the green hydrogen sector – it is a member of consortia in Germany and the Netherlands that are exploring green hydrogen opportunities.