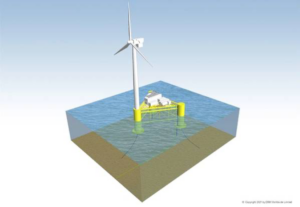 (OED) Sustainability consultancy ERM has awarded a contract to Principle Power, a provider of floating foundation solutions for the floating wind industry, to progress the Front-End Engineering Design (FEED) for a Wind-to-Hydrogen Dolphyn 10 MW prototype project off the coast of Aberdeen.

The contract was agreed following ERM Dolphyn’s receipt of £8.62 million in financing from the UK Government under the Low Carbon Hydrogen Supply 2 Competition.

The ERM Dolphyn concept employs a modular design integrating electrolysis and a wind turbine on a moored floating semi-submersible platform based upon the proven WindFloat technology by Principle Power to produce hydrogen from seawater, using wind power as the energy source.

ERM and Principle Power have been collaborating on the development of decentralized hydrogen production opportunities since 2019.

David Caine, Partner at ERM said: “It is now established that to meet net-zero ambitions in the UK and all around the world, hydrogen from offshore floating wind needs to be a significant component in any viable long-term solution for heat, electricity generation, and transport.

The ERM Dolphyn project, a first-of-a-kind, is an innovative integrated system combining all the technologies required to bring the latest floating wind and hydrogen production technologies together to enable offshore wind resources to contribute toward hydrogen production at scale. Principle Power has been instrumental in this process, and we’re delighted to extend our collaboration.”

The 10 MW demonstrator project has been described as a key step in proving the Dolphyn concept prior to commercial-scale deployment.

When fully deployed, at an expected 4 GW total capacity, ERM Dolphyn has the potential to supply energy to heat more than 1.5 million homes with no carbon emissions, thus avoiding the release of millions of tonnes of CO2 into the atmosphere every year, the companies said.

“Many of these jobs will rely on the world-class skills and knowledge found in the offshore renewables and Oil and Gas sectors. This massive opportunity is not without challenges: the rapid scaling up of floating offshore wind to meet both governments’ and markets’ energy transformation goals requires an equally massive investment in the entire supply chain,” the press statement released Tuesday read.

“We are pleased to continue our years-long collaboration with ERM on the Dolphyn project, and we are eager to further develop partnerships across the entire supply chain supporting floating offshore wind applications to support and accelerate growth in the UK and globally. Moving to FEED on the Dolphyn project is a significant milestone towards our collective carbon-free future“, said Gregory-Campbell Smith, Senior Business Developer Manager, Europe at Principle Power