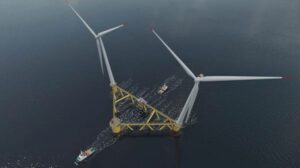 Hexicon has been awarded a CfD for its 32MW floating wind project at a strike price of £87.30/MWh (2012 real prices) taking the project a significant step closer to completion.

“Floating offshore wind is set to play an important role in the UK’s energy system, contributing to the Government’s priorities for energy security and generation of cheap, renewable power. With Hexicon being awarded the first-ever dedicated CfD award for floating wind in the UK, today is a significant moment for us that marks an important step towards achieving this goal and we couldn’t be happier with the outcome.

“With this decision, our TwinHub project will be the first floating offshore wind project in England and Wales to achieve this milestone and we can now progress to the delivery phase and continue engagement with the local communities, stakeholders, and regulators, with the support of Celtic Sea Power,” says Marcus Thor, CEO at Hexicon.

Hexicon developed its TwinWind floating foundation which allows for two full-size turbines to be placed on a single foundation, enabling more energy to be generated in a given sea area.

“The TwinHub project is a watershed moment for Hexicon. It will help kick start the floating wind sector in the South West and pave the way for larger scale commercial projects in the Celtic Sea, utilising the TwinWind and other floating technologies. Importantly, this will also support jobs and economic development in the region,” Hexicon said.

The TwinHub floating wind project is expected to be commissioned and export clean power between 2025 and 2027.

“The project will aim to maximize the use of local supply chains to bring the economic benefits of floating offshore wind to the region, including Falmouth Port, which has a potential to play an important role in the project’s development and ongoing operation and maintenance services,” Hexicon said.