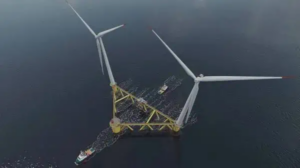 Earlier this year, applications for both grid connections and Maritime Concessions were sent in.

The first area, located south of Sicily, is 346 km2 ≈ 1,200 MW, while the second area, located northwest of Sardinia, extends to 364 km2 ≈ 1,350 MW. The two offshore areas are now prioritized for the development by AvenHexicon. According to Hexicon, the areas’ combined potential could power over 2,5 million Italian households.

AvenHexicon now has five potential development sites in Italy, situated around the coasts of Sardinia, Sicily, and Puglia.

Hexicon has cited a recent report by Global Wind Energy Council (GWEC) highlighted Italy as one of the top five emerging markets for offshore wind.

The country is aiming to generate 55% of its total electricity generation from renewables by 2030.

“The fast process and positive signals intensify Hexicon’s efforts in Italy and further strengthens the value-build of the project portfolio,” Hexicon said.

“Having obtained rights for these two water areas are evidence of our competitive offering as a project developer. This is a steppingstone for AvenHexicon, aiming to be a key player in Italy’s gradual transition to a renewable, fossil-free energy system,” said Alberto Dalla Rosa, CEO at AvenHexicon.